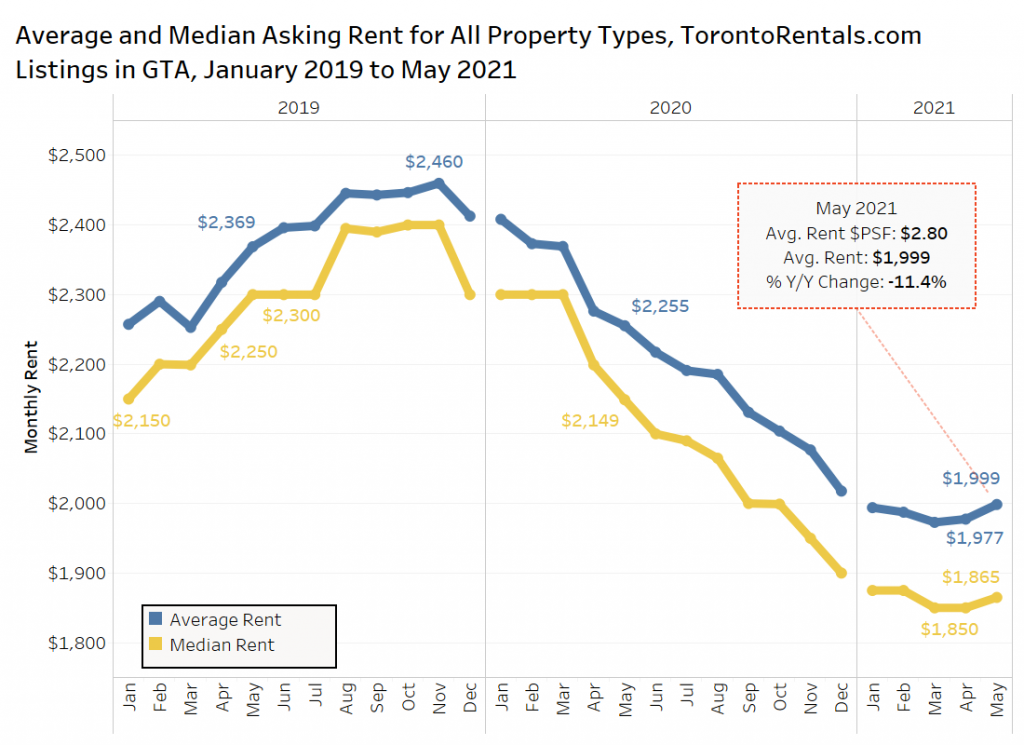 Average Rental Rates by Property Type in the GTA

The following figure presents GTA data on the average rent for single-family homes, condominium apartments, townhouses and rental apartments in April and May of 2020 and 2021 via TorontoRentals.com listings data. 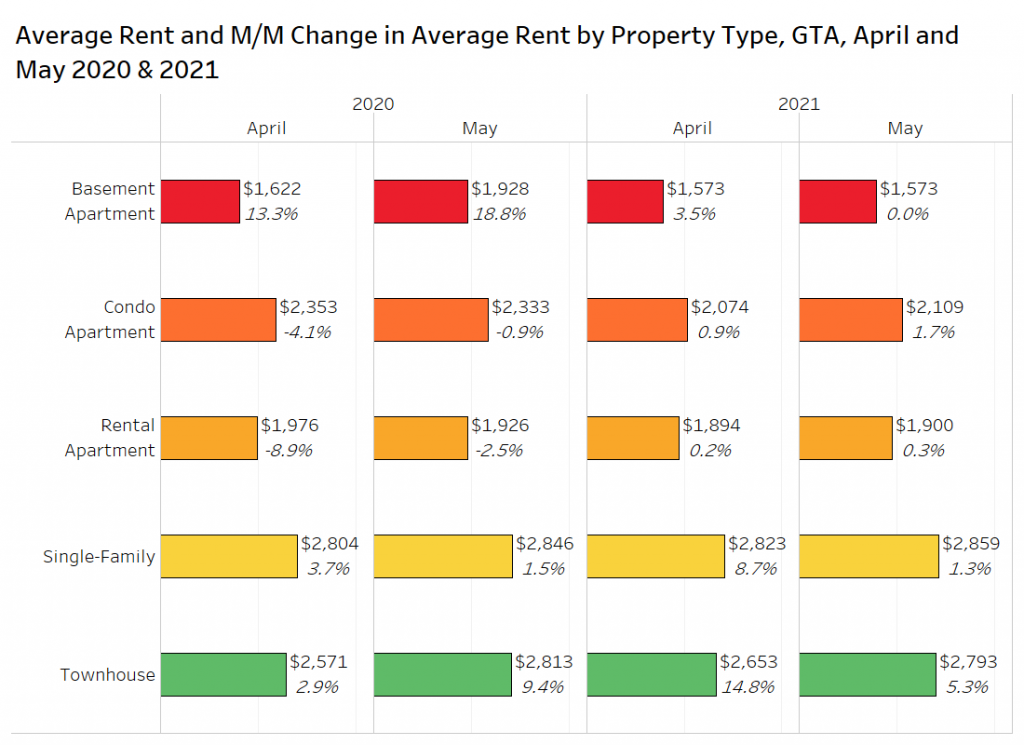 The average rent for a basement apartment in May 2021 was $1,573 per month, which remained virtually unchanged from April 2021.

Condo apartments saw their average monthly rent increase 1.7% month over month, moving from $2,074 in April 2021 to $2,109 in May 2021. Despite the modest increase, the average rent for condo apartments has declined annually by 10%.

Rental apartments have stayed relatively steady in April and May 2021, increasing by 0.2% and 0.3% month over month, respectively. In May 2021, the average monthly rental rate for a rental apartment was $1,900, which represents an annual decline of 1.3%.

In May 2021, the average rental rate for a single-family home was $2,859 per month, which represented a month-over-month increase of 1.3%. Single-family homes also experienced a month-over-month increase of 8.7% in April 2021. Rental rates are higher in 2021 than 2020, as there is increased demand for larger units in the work-from-home and educate-from-home era.

Townhouses experienced a month-over-month increase of 5.3%, moving from $2,653 per month in April 2021 to $2,793 in May 2021. In April 2021, townhouses also experienced a monthly increase of 14.8%. These increases have brought the average monthly rental rate of townhouses back to the levels of May 2020. Similar to basement apartments, the townhouse segment is typically a smaller sample, making it more sensitive to differences in individual listings.

The figure below presents data on the average rent by bedroom type in the GTA from May 2020 to May 2021 for all property types.

The average monthly rental rates for all bedroom types follow a similar pattern, experiencing declines throughout the year before staying steady or gradually increasing at the start of 2021. In particular, we can see that average monthly rental rates for three-bedroom-plus units have increased since January 2021, suggesting that the demand for larger suites is increasing as a larger share of employees continue to work from home. 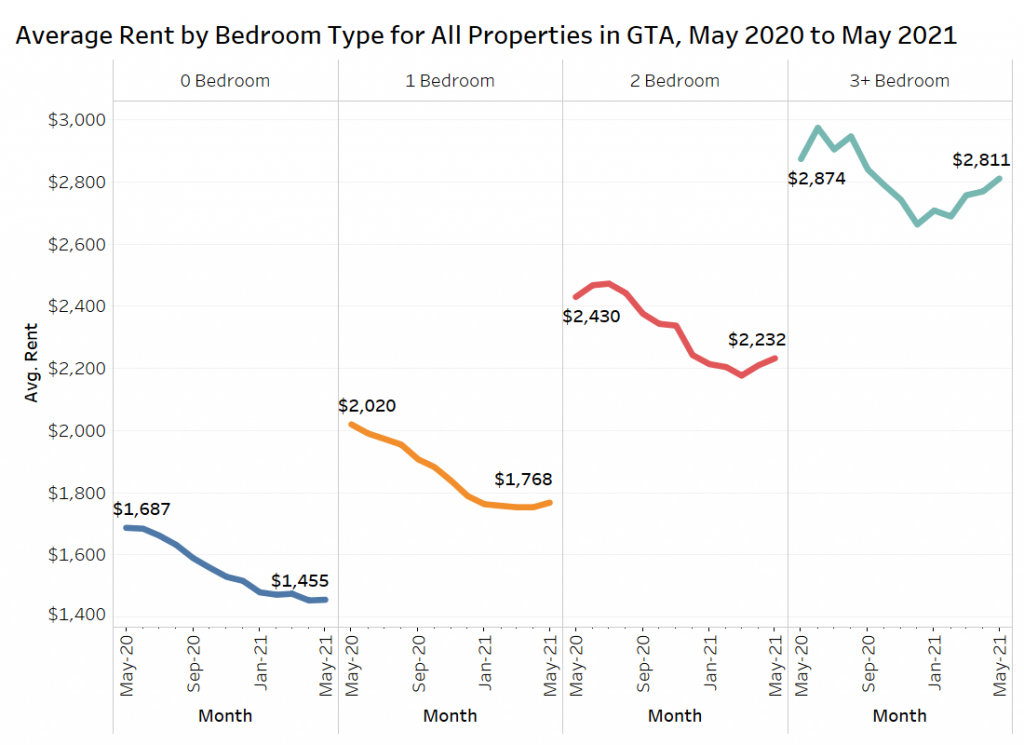 TorontoRentals.com started to separate furnished versus unfurnished units in April 2020. The figure below presents data on the average rent and average rent per square foot for condo and rental apartments by the furnished level over the last 13 months in the GTA. 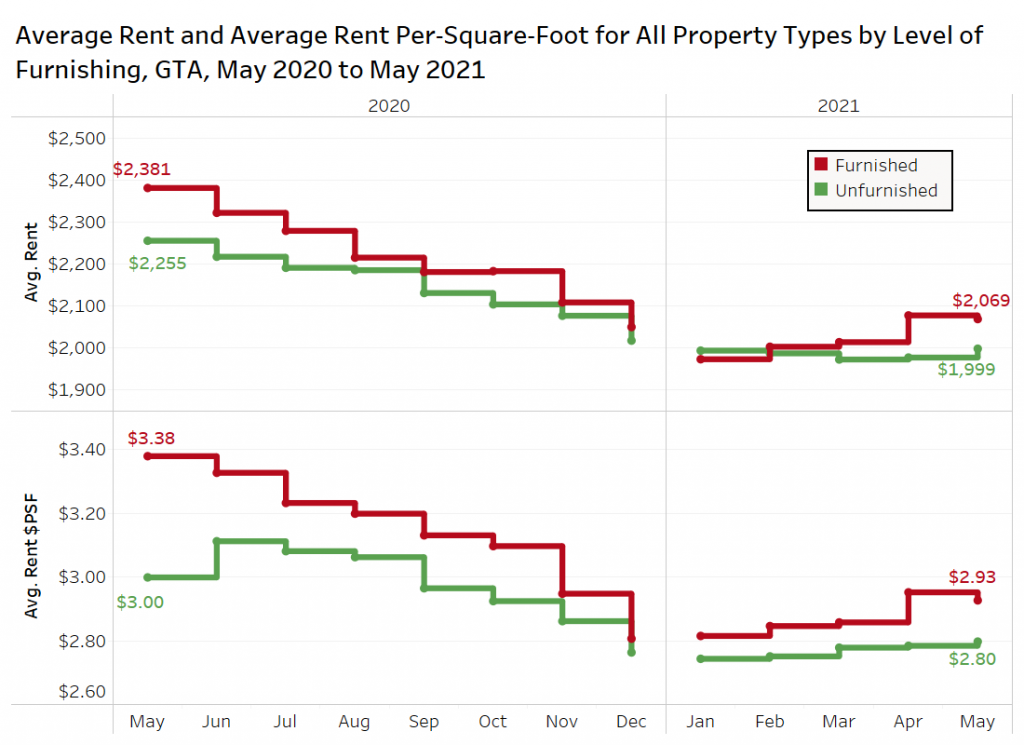 Average Rent in Toronto and the Rest of the GTA

The small sample size of single-family homes in Toronto and the rest of the GTA has a large effect on the data, leading to the monthly volatility. However, rents have increased recently, despite the flatness of rent per square foot, as the homes leasing are larger on average over the past couple of months. 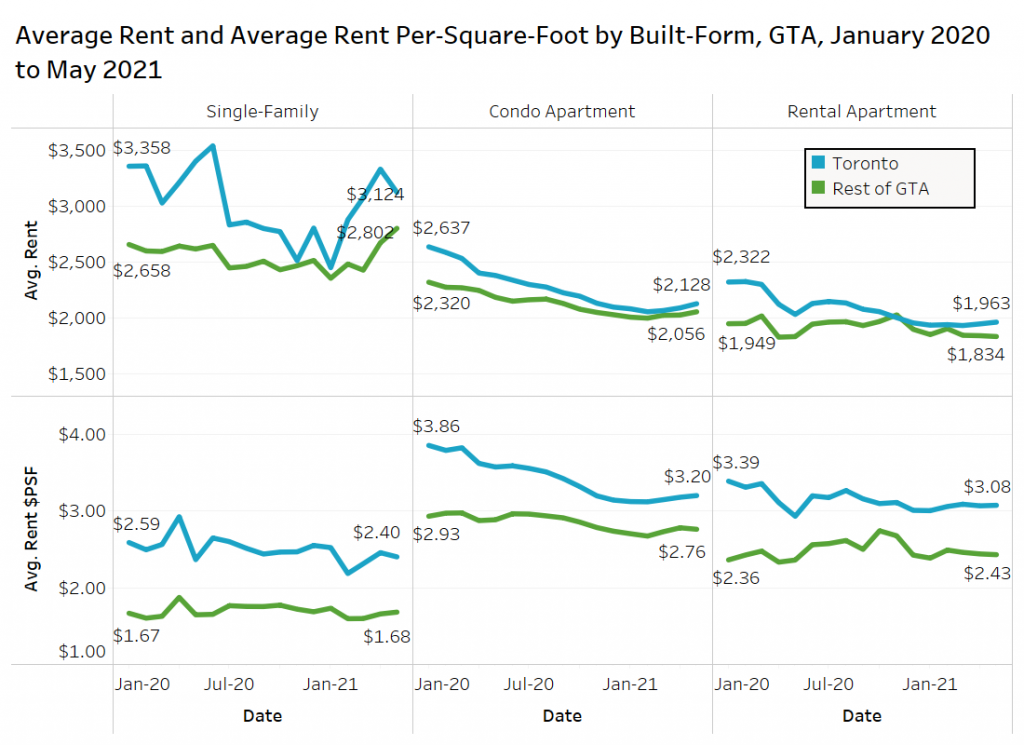 Average rent for condominium and rental apartments in GTA municipalities in May 2021 is presented below. Toronto is broken up into its former municipalities, prior to amalgamation. 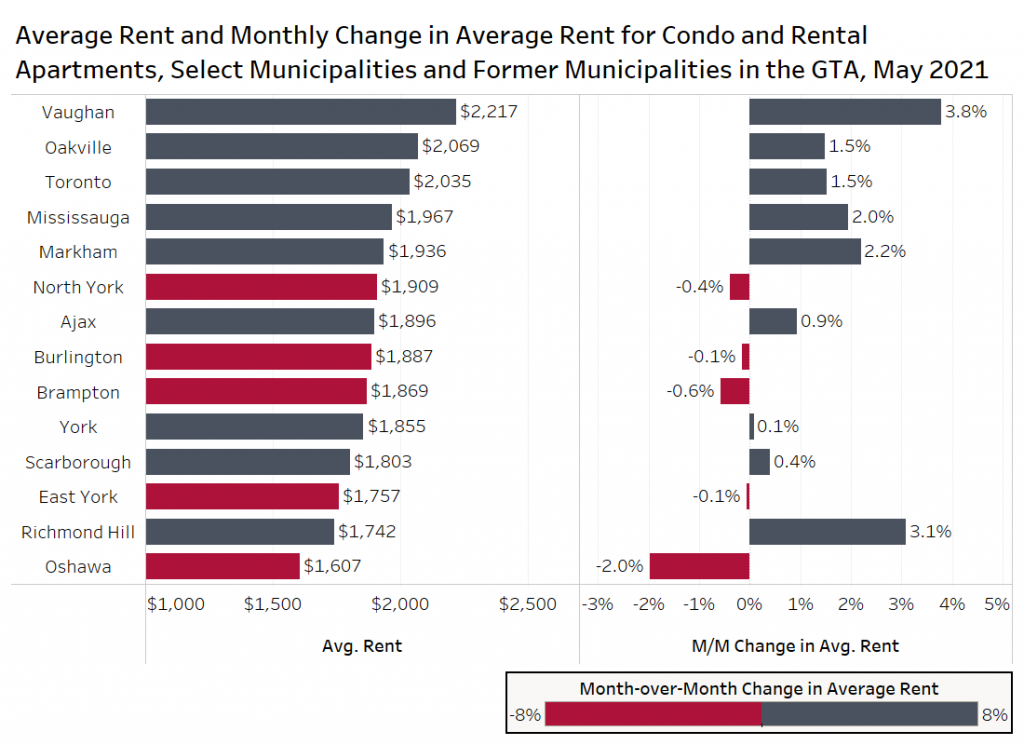 The average rent for a condo or rental apartment in Vaughan experienced the largest month-over-month increase at 3.8%, rising to $2,217 per month in May 2021. The monthly rental rates in Richmond Hill also increased at a similar pace, experiencing a month-over-month increase of 3.1% to $1,742 per month. The sample size of listings in these municipalities is not large, and as a result, their average rental rates can fluctuate monthly (there are few large rental apartments in Richmond Hill and Vaughan).

Toronto, which has a robust sample of listings, grew by 1.5% month over month, suggesting that the demand for suites in downtown Toronto is continuing to increase.

Average Rent in Select Areas in GTA by Number of Bedrooms 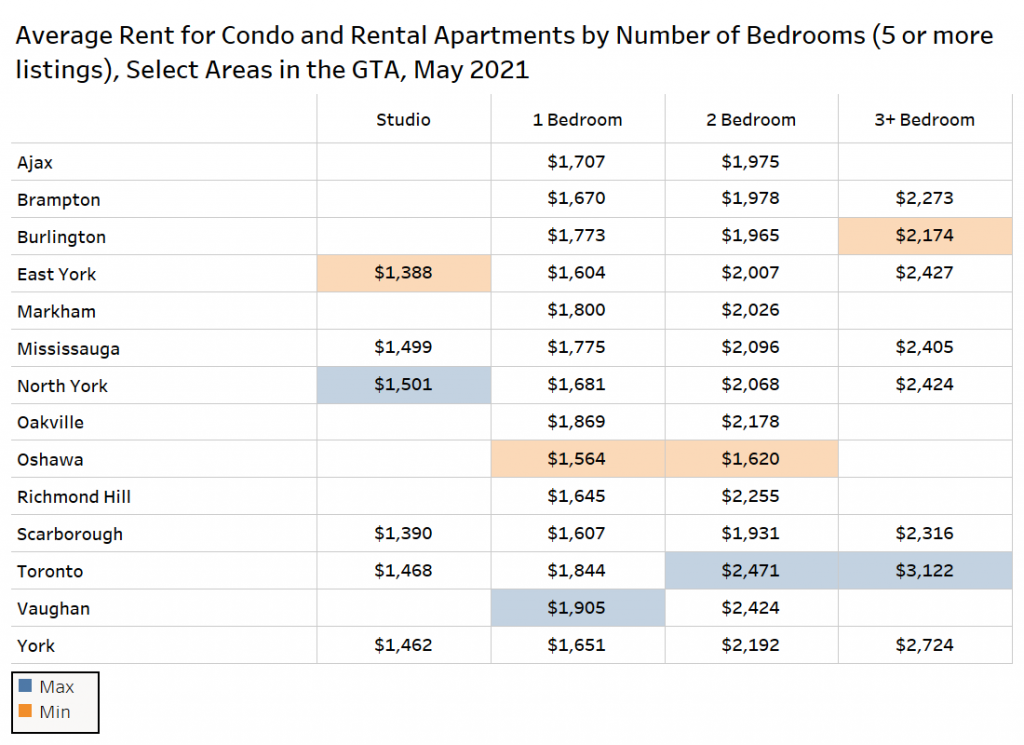 North York had the highest average monthly rental rate for studio suites at $1,501 per month, while East York had the lowest at $1,388 per month.

Vaughan had the highest average monthly rental rate for a one-bedroom suite at $1,905 per month, while Oshawa had the lowest at $1,564 per month.

The highest average monthly rental rate for a two-bedroom suite was found in Toronto at $2,471 per month, while the lowest was in Oshawa at $1,620 per month. 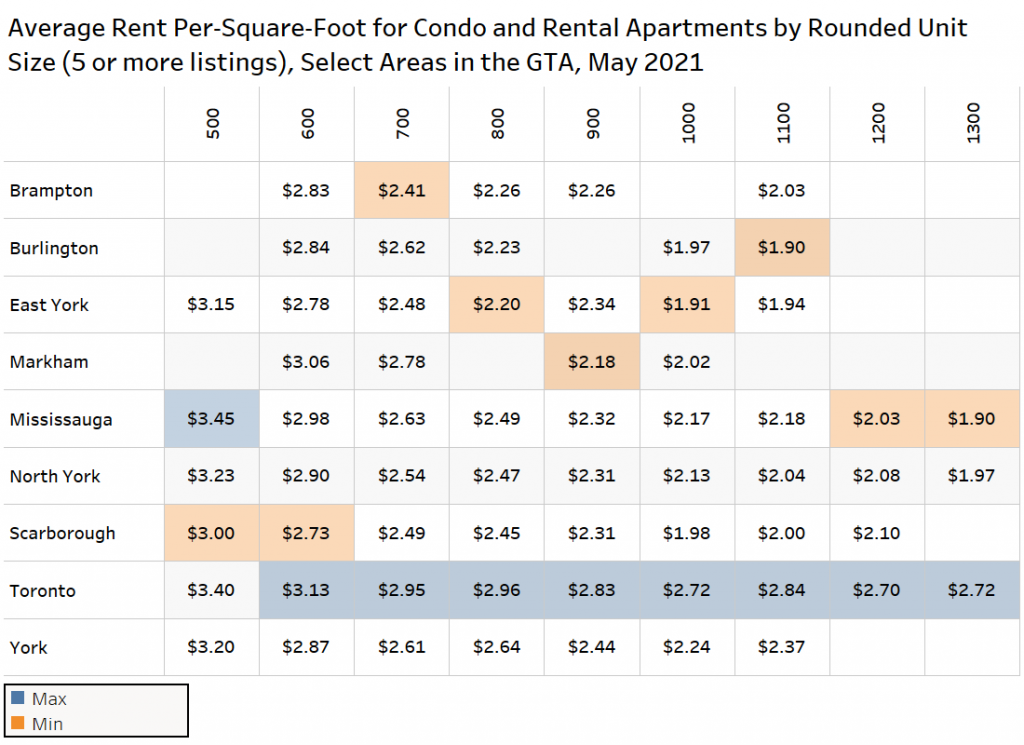 Toronto consistently has the highest average rent per-square-foot across the majority of unit sizes, topped only by Mississauga for 500-square-foot units.

Scarborough has the least expensive small suites, while Mississauga has the cheapest large units. 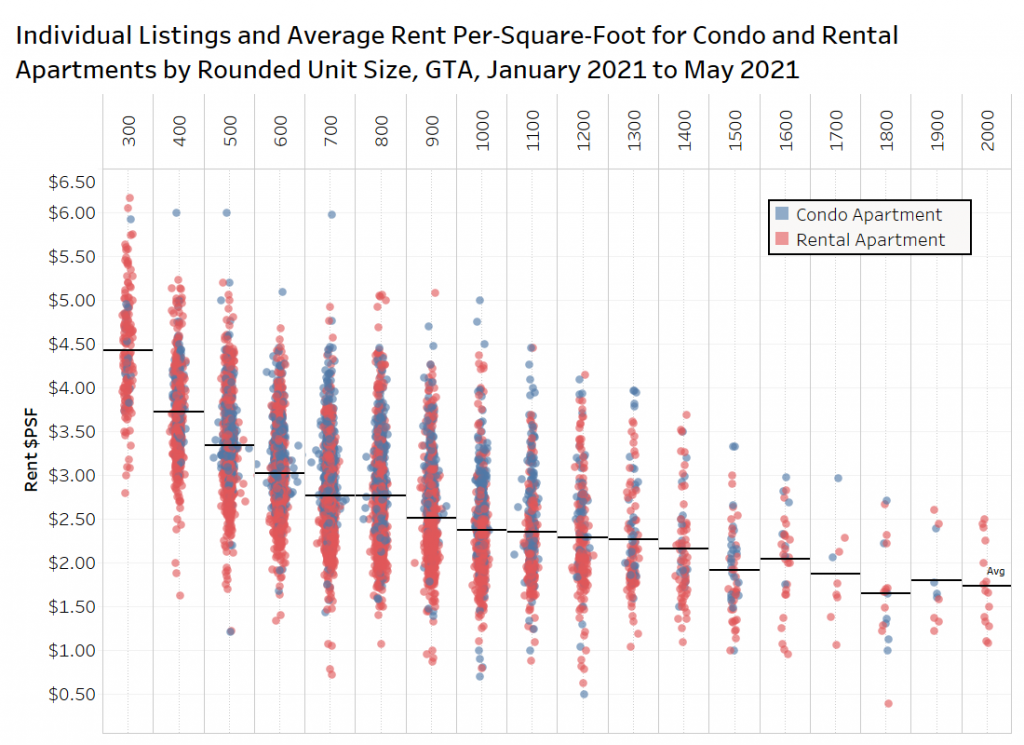 Areas Outside the Core are Recovering Faster than Downtown

While the average rents for properties in the GTA generally declined during the pandemic, the market has reversed course and started to rise again. 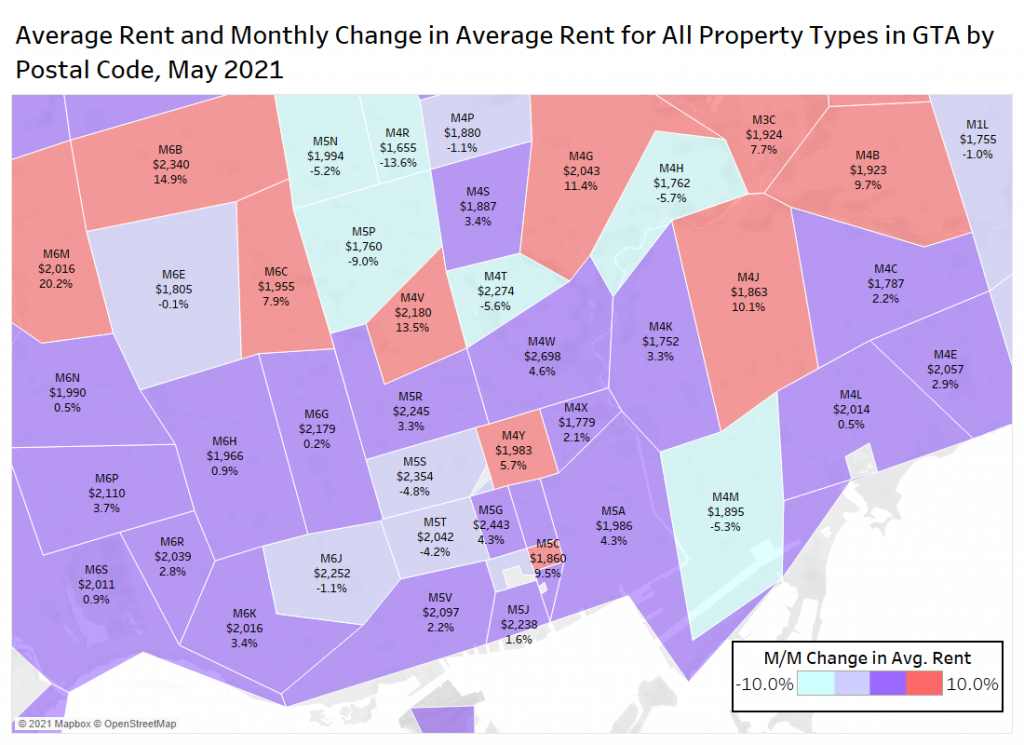 The postal codes that experienced the largest monthly decline in average rental rates include M4R at 13.6%, and M5P at 9%.

Rent Per Square Foot for Condos Built Over the Past Decade

The chart below presents data on the average rent per square foot for condominium apartments in the former City of Toronto from January 2011 to May 2021. The data is broken out for the year of completion and the separate months this year. 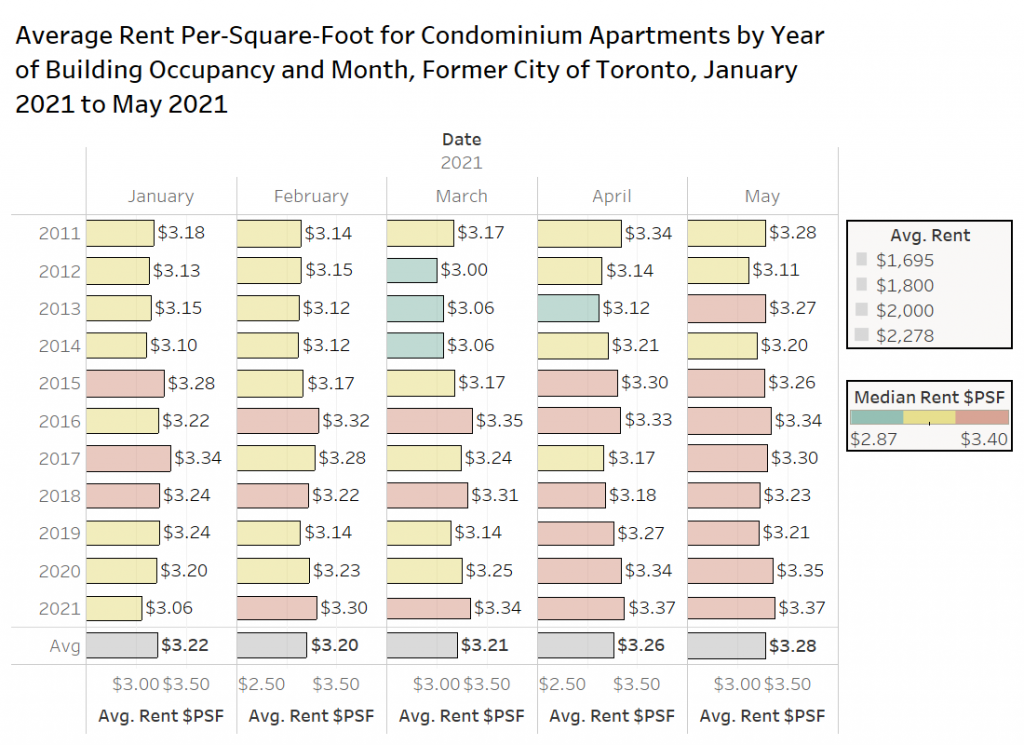 Overall, rents have increased month over month in March, April and May, with units completed over the past five years commanding slightly higher rents.

The newest buildings completed are offered at about $3.35 per square foot.

The pandemic and rolling lockdowns have undoubtedly had a major impact on the GTA rental market as it has in other major cities in Canada and the United States, with average monthly rents declining throughout the year. The rapid pace of decline has slowed considerably, and in some cases, several rental metrics have begun to slowly reverse trend and increase.

Several American cities including New York, San Francisco and Chicago are reporting strong lease-up activity over the past two months, and with the Canadian vaccine rollout improving, the Toronto market might be only two to three months behind, with a big pick-up in leasing activity expected in the fall. Bullpen is forecasting rent growth of 12% to 14% next year when the borders open, tourism ramps up, students return to campus, and many office towers are back to full capacity.

Bullpen Research & Consulting Inc. works with data from TorontoRentals.com, a rental listings website and has access to 10,000 to 20,000 listings per month. The analysis is based on those listings unless otherwise noted. 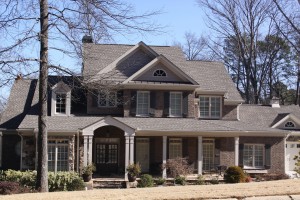 A story of massive debt, near foreclosure and renting after owning 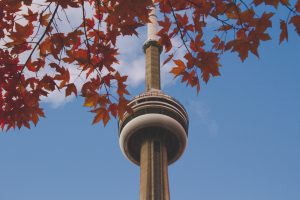 Why Toronto is a Top Destination for New Immigrants

Canada has been a country of immigrants for centuries. For the past 70 years, while Ontario … 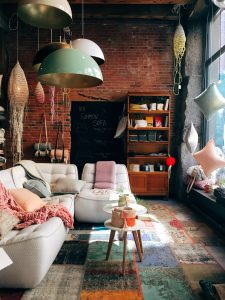 4 simple tricks to spruce up your Toronto apartment

For some of us who actually dig decorating and living in style, living in a … 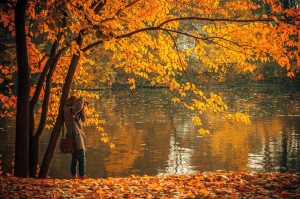