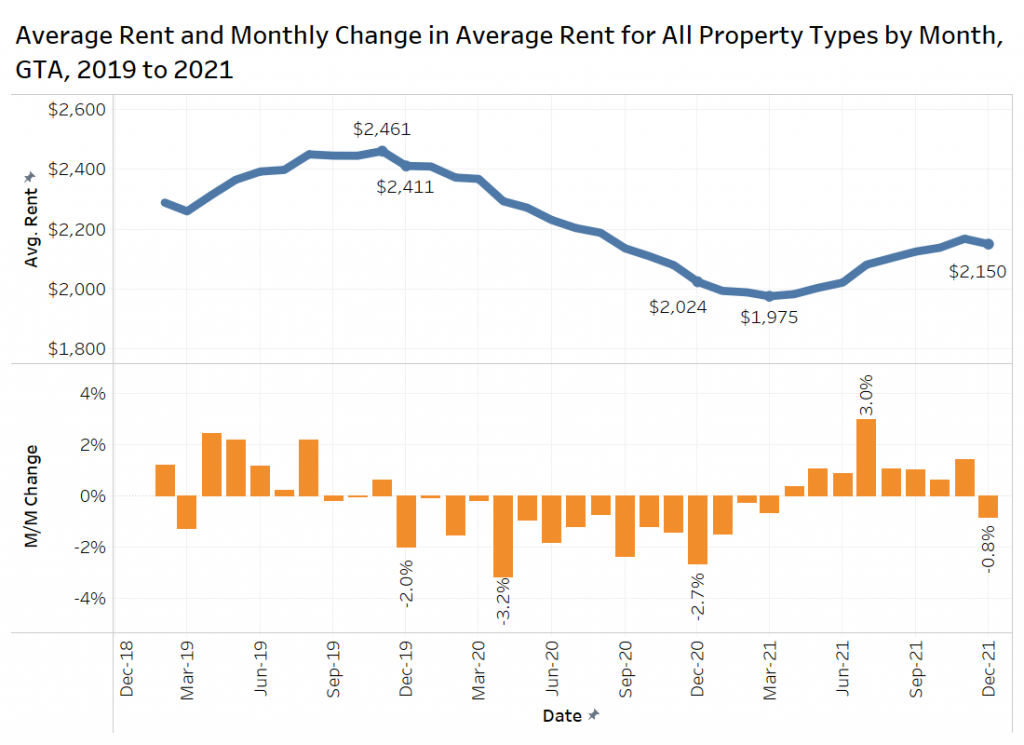 The figure below presents the average quarterly rent and the quarterly change in average rent in the GTA organized by property type via TorontoRentals.com listing data. 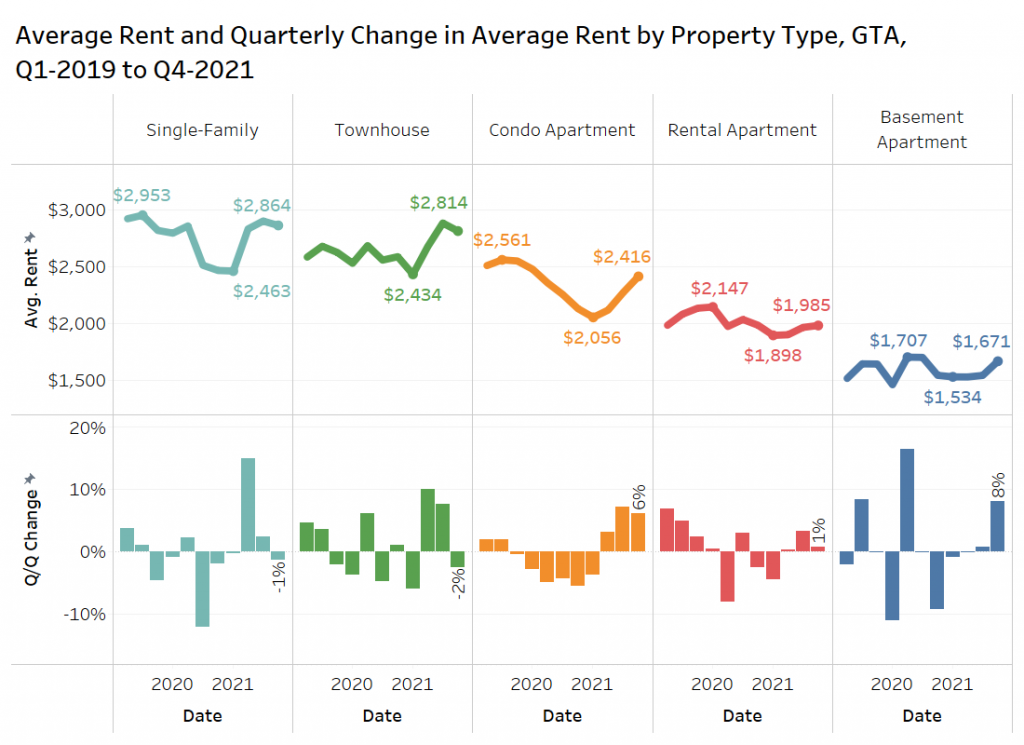 Condo apartments and single-family homes saw their average quarterly rental rates follow a similar path, moving from peak levels in late 2019 to three-year lows in early 2021, followed by a recovery to near pre-pandemic levels in the fourth quarter.

Rental apartments did not experience the same level of change as condo apartments and single-family homes. In Q4-2021, the average monthly rental rate increased by 1% quarterly to $1,985 per month. Landlords and apartment owners were more likely to offer incentives or other inducements to attract tenants as opposed to dropping their rent.

The average monthly rent for townhouse units remained relatively stable until 2021, where the average rent began to increase substantially. Q2-2021 and Q3-2021 saw quarterly increases of 10% and 8% respectively. In Q4-2021, the average rent cooled off slightly, declining 2% quarterly to $2,814 per month. The strength can likely be attributed to investors buying more townhouses to rent out, and tenants looking for more space to work from home. Also, the bubble-like conditions in the resale housing market and lack of supply has likely encouraged some would-be buyers to rent temporarily as they monitor the market.

The average rent for basement apartments did not experience as big of a decline as other property types during the pandemic, but a relatively small sample size of listings results in rental rate volatility with Q4-2021 being no exception: average rents increased 8% quarterly to $1,671 per month.

The figure below presents the average monthly rental rate for condo apartments, rental apartments, single-family homes, townhouses, and basement apartments in select municipalities and former municipalities in the GTA via TorontoRentals.com listings.

Areas where the sample size was not large enough were left blank. 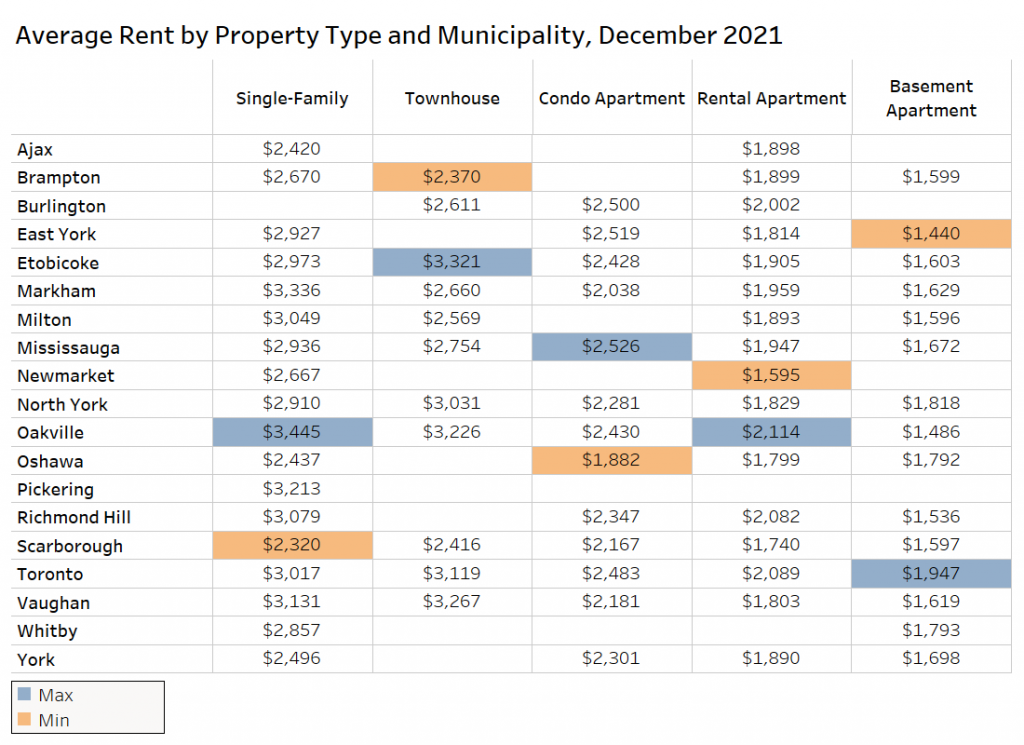 Single-family home rents ranged from $2,320 per month on average in Scarborough up to $3,445 per month in Oakville in December.

The average monthly rental rate at condo apartments ranged from $1,882 per month in Oshawa up to $2,526 per month in Mississauga.

The average rent by bedroom type in the GTA is shown in the graphic below for all property types from Q1-2019 to Q4-2021 via TorontoRentals.com listing data.

Studio units experienced rent growth of 1% quarterly in the GTA in Q4-2021 and 4% in Q3-2021, after six consecutive quarters of declines. 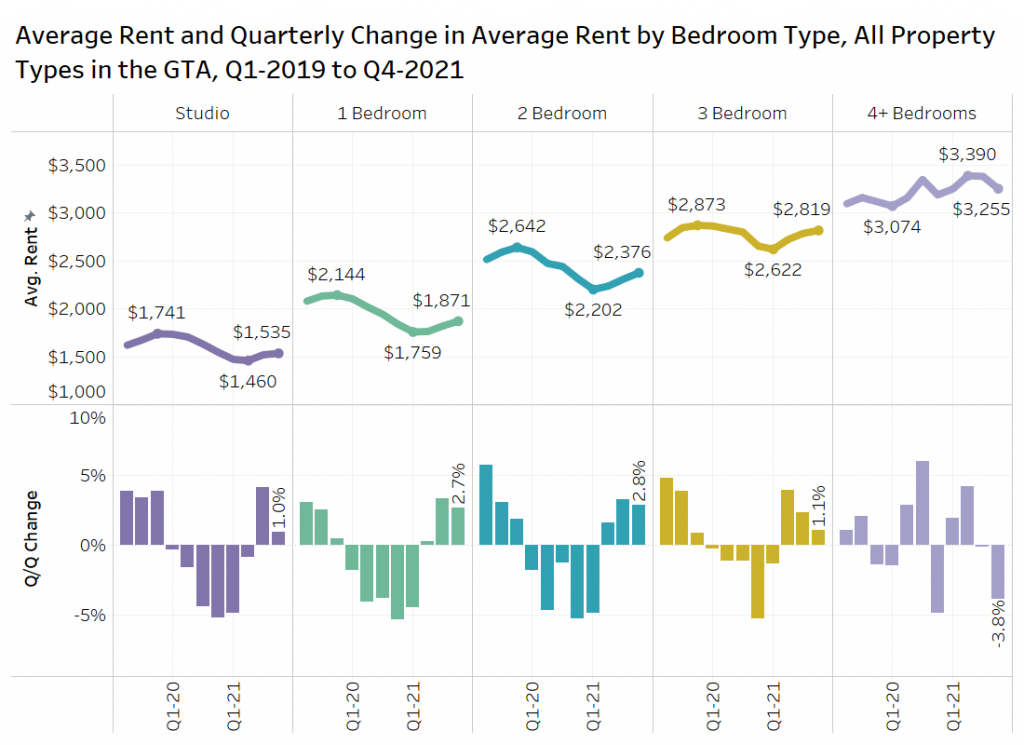 One-bedroom units increased by 2.7% quarterly to land at $1,871 per month in Q4-2021. The previous quarter also saw the average rental rate increase by 3.3% quarter over quarter. This comes on the heels of five consecutive quarters of decreases ranging from approximately 4% to 5.5% during the worst of the pandemic.

Two-bedroom units increased 2.8% quarterly to land at $2,376 per month. After peaking at $2,642 in Q4-2019, the average rent experienced several months of quarter-over-quarter declines to hit a low of $2,202 per month at the start of 2021. The last three quarters have seen the average rent increase quarterly as the rates begin to recover.

Units with four or more bedrooms have seen average rents trend upward since 2019, with only one quarter of significant decline of 4.8% in Q4-2020 during the pre-vaccine lockdown. Contrary to the other bedroom types, the more recent quarters have seen the average rent begin to decline. In Q4-2021, the average monthly rental rate has declined 3.8% to land at $3,255 per month. Listings for units with four or more bedrooms are not as common as the other bedroom types, which may lead to higher volatility in rental rates.

The figure below presents the average monthly rental rates by bedroom type for select municipalities and former municipalities (prior to Toronto’s amalgamation) in the GTA via TorontoRentals.com listings data.

Areas with insufficient sample sizes were left blank in the chart. 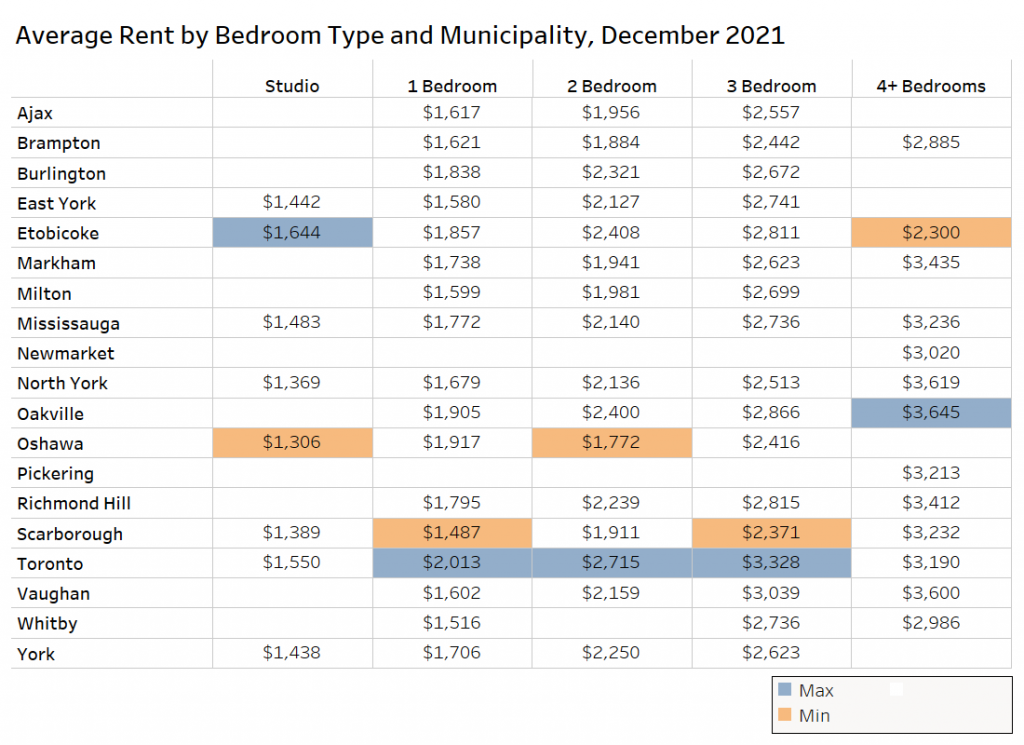 The average monthly rental rate for studio units ranged from $1,306 per month in Oshawa to $1,644 per month in Etobicoke.

Two-bedroom units had average monthly rental rates ranging from $1,772 per month in Oshawa to $2,715 per month in Toronto.

Four-plus bedroom units had rents ranging from $2,300 in Etobicoke to $3,645 per month in Oakville. 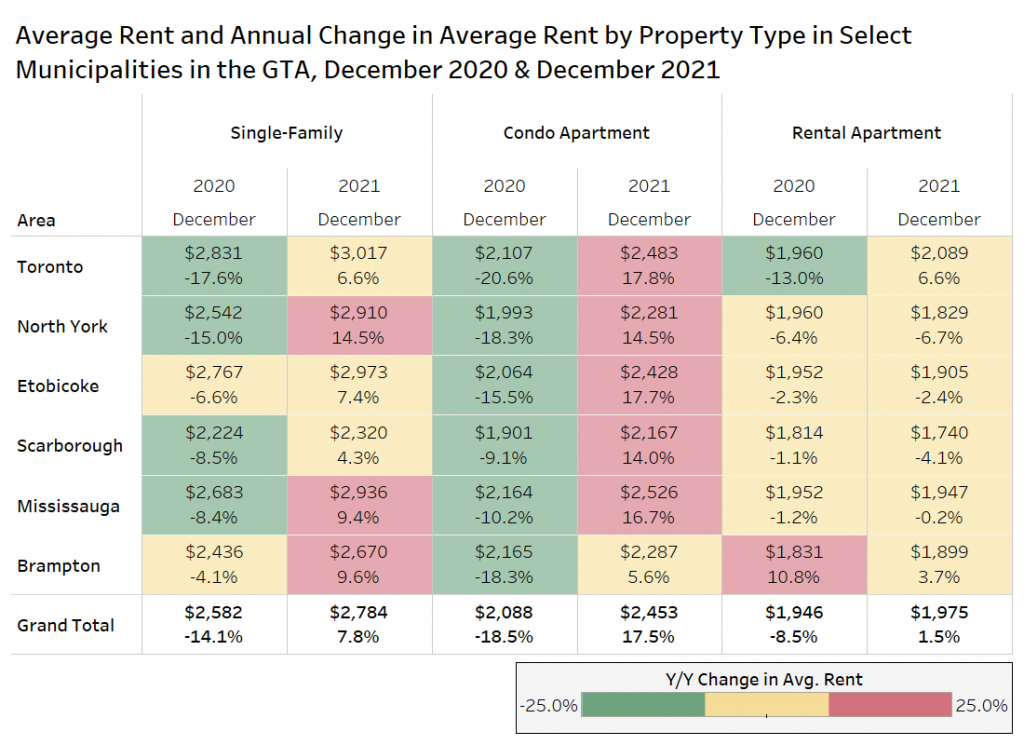 Condo apartments saw annual increases in all of the selected municipalities, with Toronto leading the way with an annual increase of 17.8%. Rental apartments only saw annual increases in Brampton and Toronto, with many of the other selected municipalities experiencing annual declines in average rent. Some of the declines can be attributed to a change in the composition of listings, with larger units leasing quickly and more small units on the market in comparison to previous years.

Change in Pageviews on TorontoRentals.com

The figure below shows the annual change in the total number of pageviews by municipality in the GTA via TorontoRentals.com listings data, comparing Q4-2021 to Q4-2020. This map can provide some insight into which municipalities tenants have become more or less interested in. 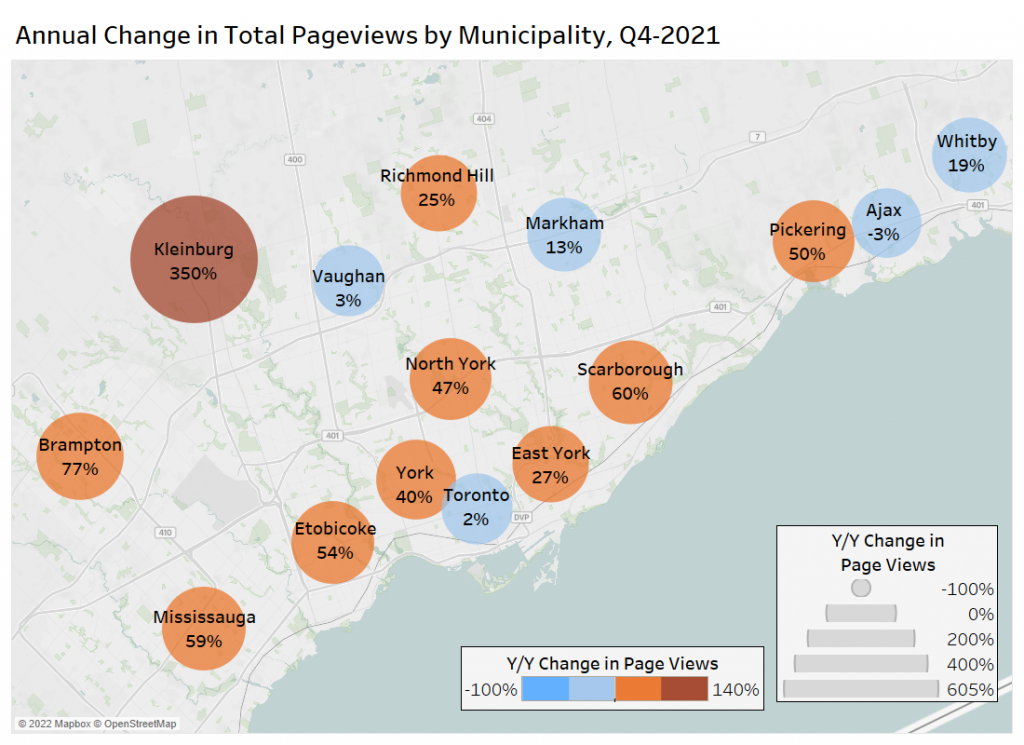 Many of the municipalities in the GTA experienced a positive annual change in the total number of pageviews, which is perhaps a result of the working public slowly returning to the office as society begins its slow crawl back to normalcy.

Excluding the small Kleinburg area, the biggest jump in online activity by prospective tenants was in Brampton, with pageviews up 77% annually, while Mississauga and Scarborough were both up by about 60%.

The figure below presents the average rent in December 2021 for condo and rental apartments by neighbourhood in the GTA via TorontoRentals.com listings. 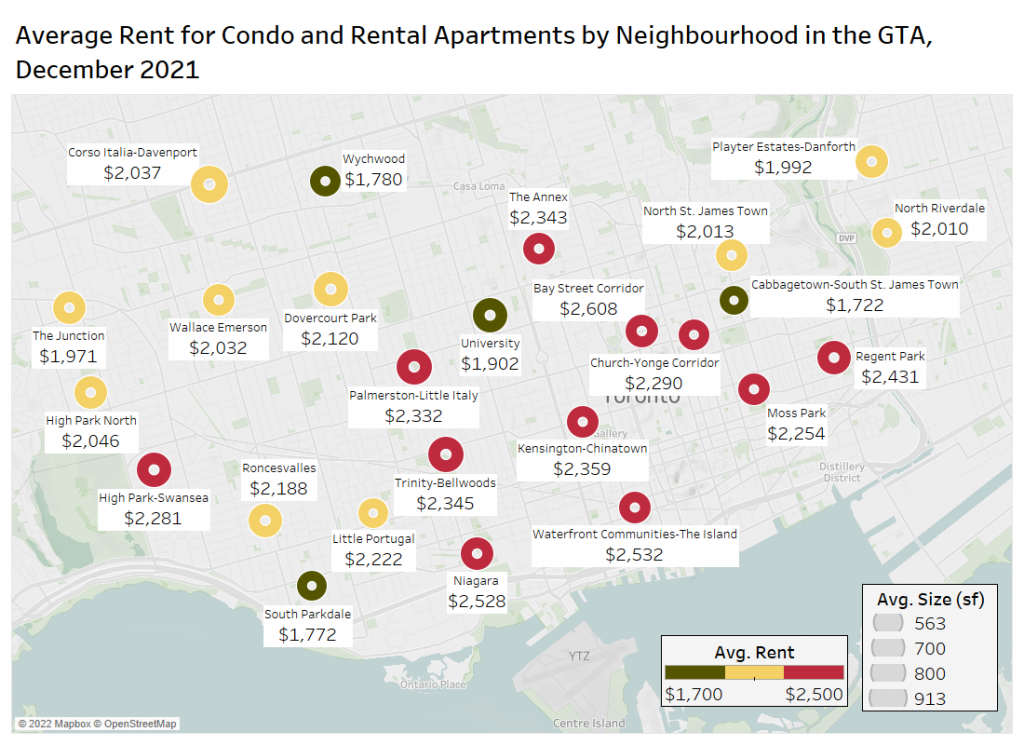 The chart below looks at the average quarterly rent per-square-foot for the most active condo projects in Toronto over the last two years.

YC Condos and Massey Tower had average rent levels in Q4-2021 that exceeded Q4-2019, while the other four major projects remain below their pre-pandemic levels. 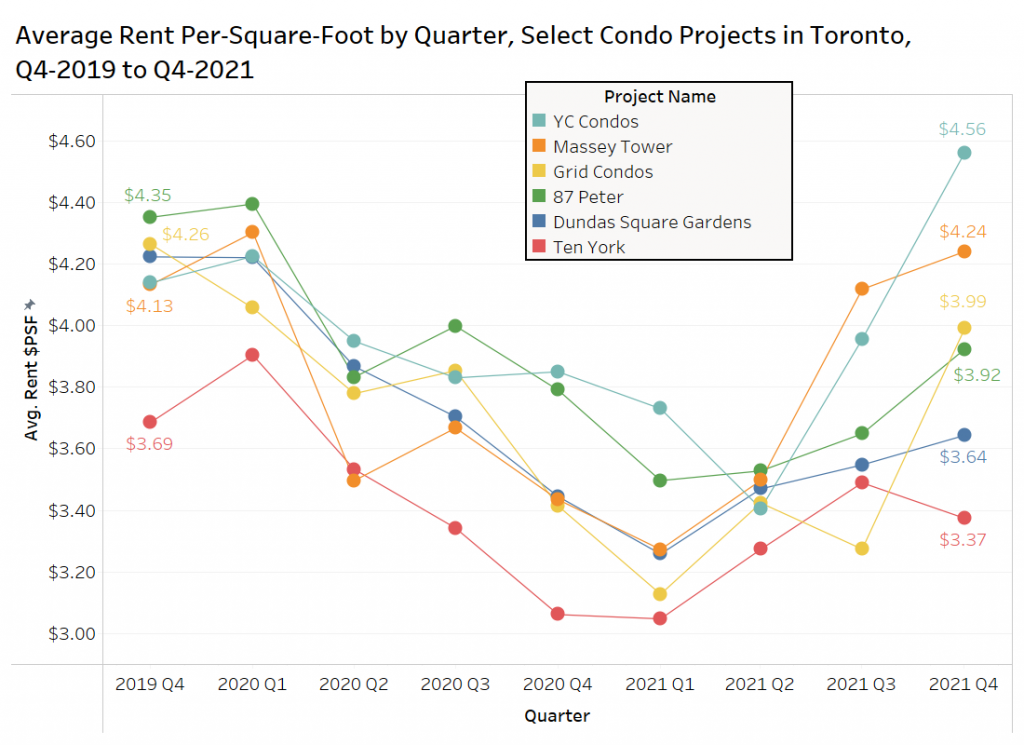 After two years of pandemic related lockdowns, the market has been recovering as monthly rental rates approach similar pre-pandemic levels for a couple of property types. Overall, the average monthly rental rate was $2,150 per month in December 2021, which is still 13% lower than the peak of $2,461 per month experienced in late 2019.

Condo apartments and single-family homes have almost fully recovered, while the average monthly rent for townhouses have soared to new heights. The average rent for rental apartments continues to slowly and gradually decline, while basement apartments remain relatively stable.

The annual changes in the total number of pageviews shows that rental apartments are increasing in popularity, likely fueled by the re-opening of the economy and a slow return to normalcy. It remains to be seen what this increased attention paid to rental apartments will have (if any) on the monthly rental rates for rental apartments. 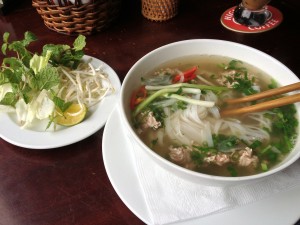 Flavours of Toronto: Cheap and addicting pho, bao, banh mi and vermicelli at some of Toronto’s best Vietnamese restaurants

For a Toronto winter, there’s sometimes nothing better than a hot bowl of soup overflowing … 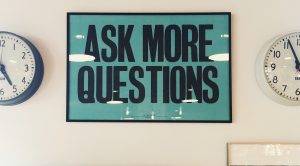 100 Questions To Ask Before Renting In Toronto

Finding a place to live is no easy feat, especially in the current renting climate … 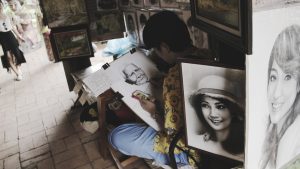 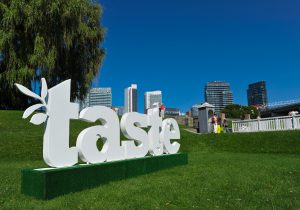 This weekend marks the start of some HUGE festivals in Toronto, including Taste of Toronto …